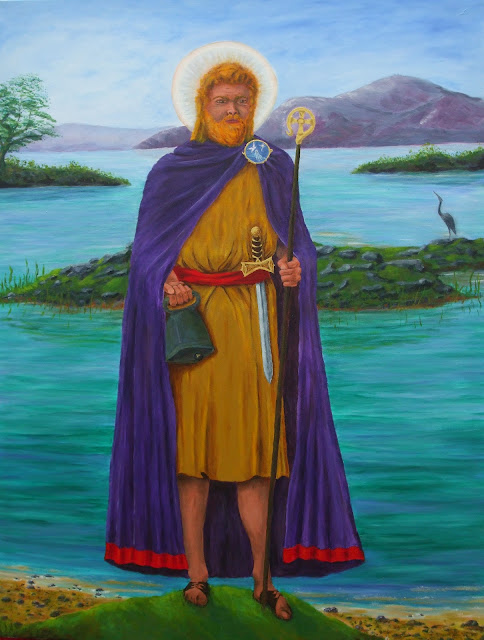 Above is my husband Alan's most recent picture - of St Kessog, an early Celtic Saint, who may well have been the patron saint of Scotland, before Andrew was accorded that honour.


There are several versions of the story of St Kessog. One is that he was born into the royal family of Munster, in approximately 460 AD, and even as a child was associated with miracles. Other versions of the tale have Kessog born in Strathclyde, and travelling to Ireland, to study, before returning to Scotland. But since, at that time, the two peoples were so closely inter-related, and since there was a great deal of travelling between the two places, it perhaps doesn’t matter that we will never know for sure. He was believed to be a disciple of St Patrick, was tutored by St Malachoi and it is certain that at some point he was sent to Strathclyde, as a missionary, coming to Luss on the shores of Loch Lomond, at the beginning of the sixth century.

The Celtic Church of that time was quite austere and its holy men believed in living the simple life, in tune with the natural world and the changing seasons. Kessog, although an important man in the early church, was no exception. Tradition says that he built his ‘cell’ on the beautiful and peaceful island of Inchtavannoch (Monk's Island), opposite Luss. Nothing remains of St. Kessog's original buildings, although we can assume that they were very simple – possibly circular beehive huts in the manner of Skellig Michael in Ireland. Ruins found on the island are those of a later monastic building with an ancient graveyard.

The name Luss means herb or plant, and there would probably have been rich grazing around here on the sheltered and fertile shores of the loch, so it would have been a good base. Kessog would, however, have travelled throughout the region, on his missionary work, and there are many ancient names, associated with him, including a Kessock Hill, near Inverness. He was eventually killed at Bandry, just to the south of Luss, between 520 and 530, which would have meant that he had reached rather a great age for that time and place! The legends and stories say that a Pictish chief paid men to murder him. He was said to have been killed on the druid's new year (March 25th) near an ancient druid site, which means that his death may have had political overtones, especially if he were – as seems likely – a strong and successful missionary, whom people loved. The site of his death used to be marked by a cairn, although it has disappeared over the years, as have the few relics directly associated with him.

We know that, as a bishop of the early church, Kessog would have had a crozier, as a mark of his office. This was passed down to the Colquhoun family, who were known as the ‘guardians’ of St Kessog, and may even have been blood relations of the saint, but it has disappeared, over time. It may have been hidden or destroyed during the troubles between the Macgregors and the Colquhouns in the early 1600s

Kessog would also have had a bell with which he would have called his people to prayer. This would almost certainly have been the traditional celtic ‘square’ handbell (such as Mungo would have used, in Glasgow, and which is now on that city’s coat of arms). There is some evidence that Kessog’s bell survived until the seventeenth century when it was sold and subsequently lost.

The painting depicts him as being both strong and kindly, which he must have been, to live for so long, and to attract so many followers to Christianity. He is holding both his crozier, as a mark of his office, and his bell, He wears the traditional celtic saffron-dyed tunic, and a rich purple wool cloak, which would also have been a sign of his office. The Celts were known to be good at making this dye, but it was difficult and expensive to produce, and would have been a mark of the status of the wearer. Nevertheless, Kessog is quite simply dressed, in tunic and leather brogues, as befits the plain man he undoubtedly was. He wears a small sword, partly since this would have been a practical necessity, at the time, and partly as a sign of his name, which means ‘Short Sword.’ He is also known as ‘the soldier saint’ and is the patron saint of soldiers. Behind him is Ben Lomond, and an outcrop of his island, with the heron in the background . This bird was a celtic symbol of individuality, patience, solitude and independence, all of which seem to be suitable symbols of Kessog himself.

This is the first in a planned series of pictures of saints - if you're interested in commissioning a picture for your church or school, please contact us through this blog.
Posted by Catherine Czerkawska at 2:46 pm

Catherine Czerkawska
I write historical and contemporary novels, short stories, plays and non-fiction. I live in a Scottish country cottage with my artist husband. I love gardening and I also collect and deal in the fascinating antique textiles that sometimes find their way into my fiction.